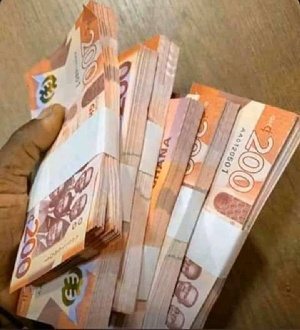 A special operation by the Ghana Police Service has led to the arrest of 15 women, who are part of a gang printing and spreading fake currency notes across the Kumasi Metropolis.

The gang was rounded up at separate locations in the metropolis on Wednesday, May 27, 2020, police sources confirmed to Dailymailgh.com

The arrest of her accomplices followed earlier operations at other locations in the Metropolis and other Districts in what officers have described as most significant to detect counterfeiting.

When police arrived at Embassy Hotel, one of the hideouts in Kumasi at about 10pm, eight persons were arrested. They have been named as; Diana Asamoah, 24, Abena Boatemaa, 33, Afia Pokuah, 40, Abena Gyamfuah, 28 and Charlotte Oforiwaa, 29.

The others are; Joana Yeboah, 29, Sandra Oforiwaa, 30 and Serwaa Rebecca, a teenager.

The team also made a stop at the Ducor Hotel at Abrepo in Kumasi where the seven other suspects were arrested. They were in separate hotel rooms when police stormed the facility just before 11pm.

A genuine cash sum of ¢2,000 and suspected counterfeit notes in various denominations totaling ¢24,110 were seized by the armed policemen.

“Assorted items like microwave, wall clock, bicycle, cooking oil, silver set, soap, pepper, tubers of yam, agro chemicals were retrieved from them purported to have been purchased with fake currencies just to gain genuine currencies,” the police said in a statement.

The suspects have since been detained and will face court soon while the seized cedi notes have also been sent to the Bank of Ghana for examination.

Police believe the two hotels could have a role to play in the illicit printing of the notes and may invite management for questioning.

Efforts are also underway to arrest other accomplices, the police said.

At the time of filing this report, however, a nursing mother was also in custody at the Feyiase Police Station after a bag load of fake notes were found on her.

She was arrested on Tuesday, by traders at the Aputuogya market where she embarked on a shopping spree. Witnesses say she may have been lynched but for the timely intervention of the police.

Tamale: Man Killed After Rescuing Girl From Being Raped